Email ThisBlogThis!Share to TwitterShare to FacebookShare to Pinterest
Labels: Praise Be Video

Praise Be featured in NME's Best Downloads This Week! 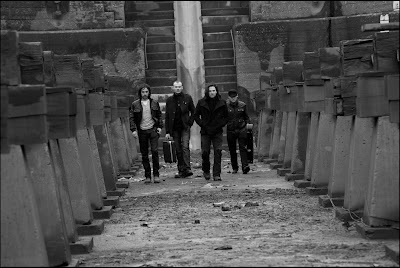 We are featured alongside The White Stripes, The Strokes, Pendulum, James Blake and Noah And The Whale in NME's Daily Download!!

"This Irish rock band have drawn comparisons to U2, with frontman Denny's vocals sounding an awful lot like Bono's. You can download 'Praise Be' (the band's "warm up" track to their first proper single due out this March) below. The song was recorded during sessions the band recorded with Chris Potter (who's previously worked with Blur, The Verve, and U2 themselves)."

Click here to see this on NME.com
Posted by The Plea at 05:42 0 comments

Email ThisBlogThis!Share to TwitterShare to FacebookShare to Pinterest
Labels: Praise Be NME.com

Email ThisBlogThis!Share to TwitterShare to FacebookShare to Pinterest
Labels: Praise Be Video Trailer

Praise Be Photoshot by Jill Furmanovsky The Plea Antwerp Feb 2011 a photo by ThePlea on Flickr.

Check out the Jill Furmanovsky shoot from the Praise Be video - Jill is a legendary photographer, who has taken fantastic photos for the likes of Bob Dylan, Led Zeppelin, Pink Floyd, The Clash, The Sex Pistols, The Pretenders, Oasis and now us!

Email ThisBlogThis!Share to TwitterShare to FacebookShare to Pinterest
Labels: Praise Be Photoshot by Jill Furmanovsky

The Plea "Miracle" by Planet Function
Posted by The Plea at 08:51 0 comments